Engineer Ruth Mugurusi from the Drilling and Blasting Department briefs the guest of honour at the opening ceremony of the fifth National Mining Technology Exhibition, Minister of Minerals Dr Dotto Biteko (right), who visited the GGML exhibition stand. To his left, AngloGold Ashanti’s Vice President of Sustainability for Tanzania and Ghana, Simon Shayo. 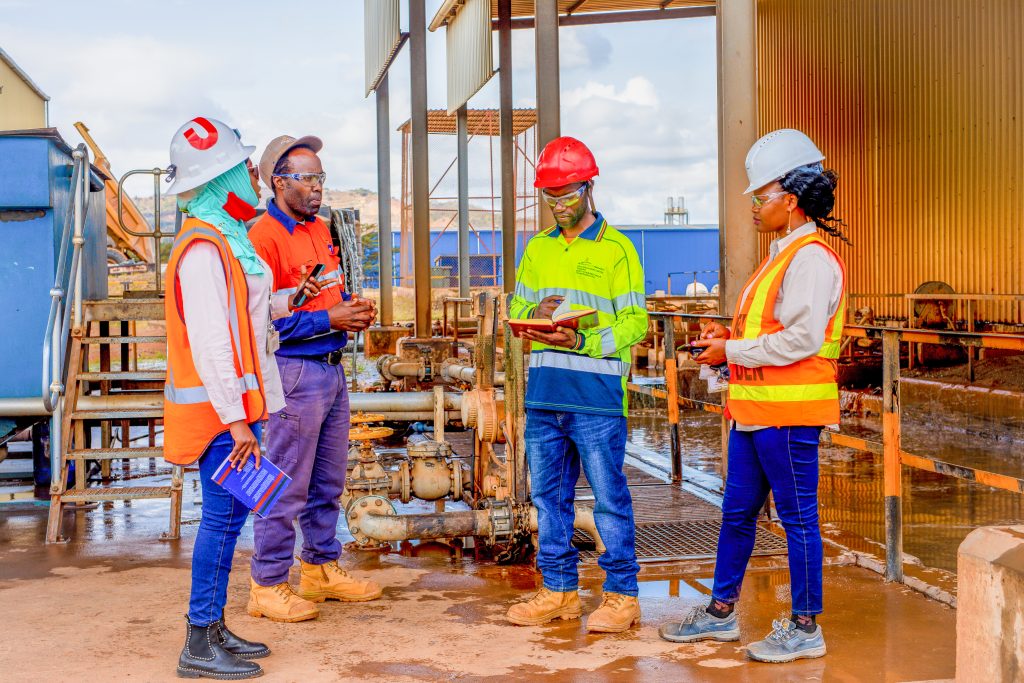 Josephine Kimambo and Shadya Jamal in their daily work routines. 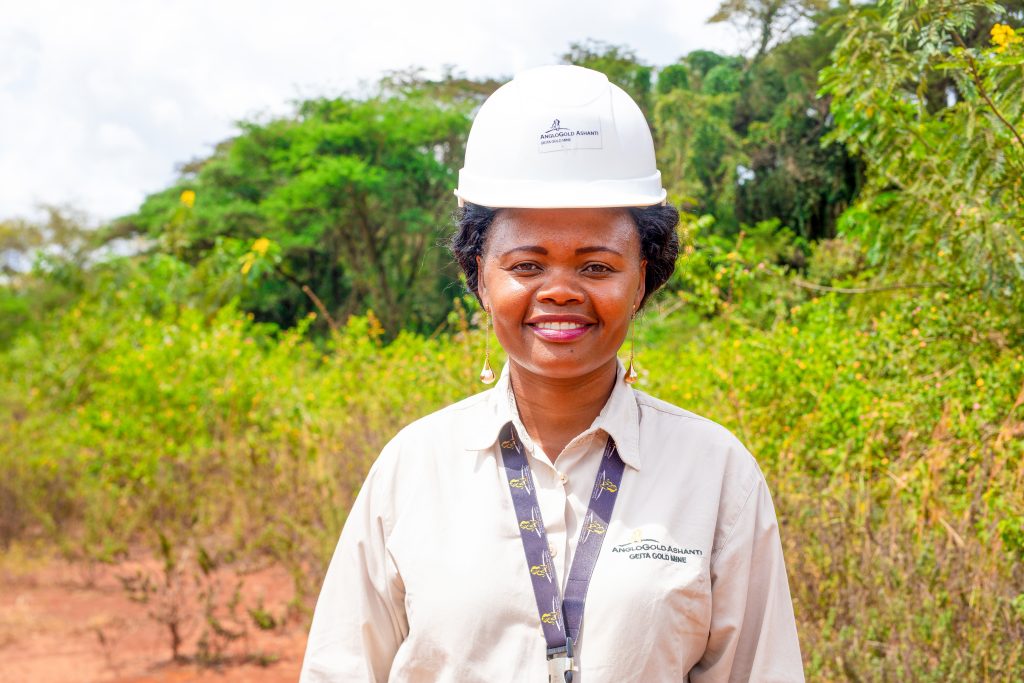 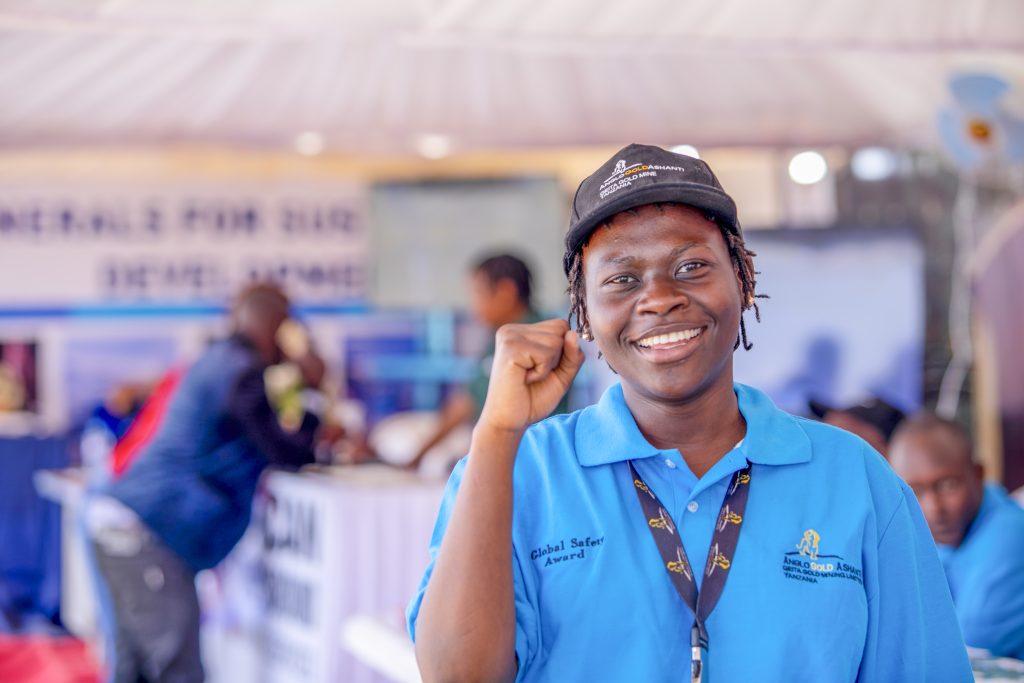 Engineer Ruth Mugurusi from the Drilling and Blasting Department at the fifth National Mining Technology Exhibition. 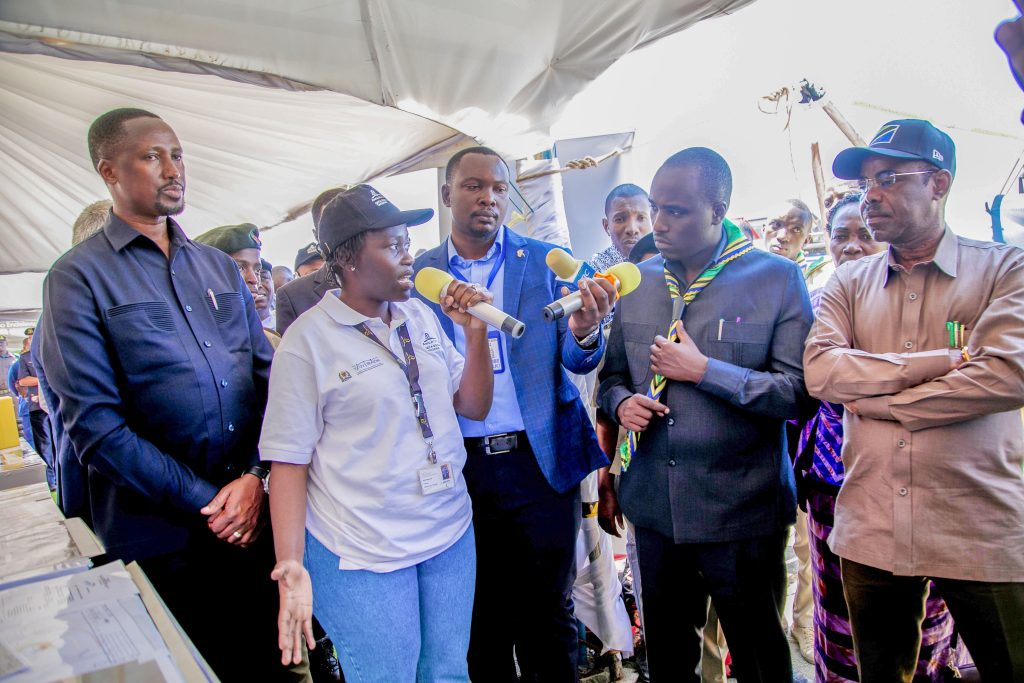 Engineer Ruth Mugurusi from the Drilling and Blasting Department briefs the guest of honour at the opening ceremony of the fifth National Mining Technology Exhibition, Minister of Minerals Dr Dotto Biteko (right), who visited the GGML exhibition stand. To his left, AngloGold Ashanti’s Vice President of Sustainability for Tanzania and Ghana, Simon Shayo.

The struggle for gender equality is ongoing, although in recent years there has been a closer parity in the opportunities that are afforded to women compared to their male counterparts. There is still some way to go, however. Young girls today begin life’s journey with lofty dreams, but most often, culture extinguishes these flames of optimism, compelling women to stick to the traditional roles of homemaker and mother. Consequently, this chips away at a young woman’s self-belief, with most not knowing their true worth.

Today, attitudes and practices are changing, and gender is not seen as the obstacle it once was, preventing women from pursuing their dreams. The key drivers of success today are aptitude, commitment, hard work, dedication, and a “can do” attitude.

Josephine Kimambo and Shadya Jamali are among the few women in the mining industry, forming part of Geita Gold Mining Limited’s Health, Safety, Environment, and Training (HSE&T) Department. They both live by the mantra that “an ordinary life in an extraordinary world is boring and unfulfilled.” Believing that everyone is unique and can leave a legacy has proved from their perspective that gender is not a barrier as long as they know the purpose of their existence.

Josephine Kimambo, currently a senior officer, joined GGML in 2012 as a graduate trainee under the undergraduate recruitment program. After completing the program in 2014, Josephine secured employment and took up the role of Waste and Chemical Officer. She has enjoyed every minute of her time working at GGML.

Josephine believes that everyone is the author of their own story and has the power to make this story a positive or negative one. “Everyone decides whether they will settle for being ordinary or not.” Likewise, she believes, “Anyone can be extraordinary as long as they are committed to self-improvement and personal development.”

“Working in mining as a woman isn’t as hard as it is perceived to be. It is a good working environment because the company adheres to international standards and has experts who continue to enhance our knowledge. There are a lot of opportunities to grow, but only if one decides to concentrate their efforts on whatever they are doing. I encourage other women working at GGML and those who wish to join the mining industry to refuse to be ordinary and refrain from making excuses for who they are. After all, being a woman is not an excuse to fail,” she urges other women.

Another member of the HSE&T Department and Josephine’s colleague is Environment Officer Shadya Jamali. She encourages women to ignore the misplaced conceptions of working in the mining industry and dispel any self-doubts in order to succeed in forging a career in the industry.

“To my dear women who are paralyzed by insecurities or overwhelmed by the odds, please don’t let fear stop you because the greatest obstacle in life is fear. As a woman who works in a male-dominated field, I understand how challenging the environment could be as we encounter many hurdles, but we must not accept defeat easily. Women have a number of potential roles to play in bringing changes to their areas, and we should get rid of outdated beliefs that women are only mothers and not workers. Women can do both and, in some instances, even more than their male counterparts,” insists Shadya.

While the ratio of women in the mining sector is nowhere near where it should be, companies around the world are striving to undo this legacy and Geita Gold Mining Limited has not been left behind. The company is actively working to discard the business-as-usual attitudes of the past and is reimagining the workplace in a way that puts inclusivity at centre stage.

In many ways, Ruth Mugurusi, the Company’s first female open pit blasting engineer exemplifies this shift in culture at GGML.

“I always intended to become an engineer, but I didn’t know what I would be majoring in specifically. When I was in form three, I was really into geography, and I remember trying to flip through a textbook looking for a connection between geography and engineering,” recalls Ms. Mugurusi.

“There was a page in that Geography textbook that was interesting since it listed the occupations one might contemplate studying, and what attracted my eye was a Mining Engineer,” said Ruth.

She jotted down the occupation and used her next break from school to learn more about mining engineering and the kinds of skills and knowledge one needs to succeed in the field.  Before getting a bachelor’s degree in China, Ruth thought she needed more hands-on experience, so she took advantage of opportunities to get that experience in both China and home country, Tanzania. So, while still at university, she completed research and became aware of the mining corporations in Tanzania. And through the Training Department of GGML, Ruth was able to apply for practical training and obtain field experience under the mentorship of very skilled stakeholders from all departments, both open pit and underground.

This exposure was quite exceptional, as unlike other places that she had trained specifically, the environment was one of encouraging individuals, all very willing to teach and explain what they do as a whole in partnering with the mining engineers. This really impacted her decision about her career path.

“The few times that I got the opportunity to perform practical training at GGML felt extremely short because the practical training offered to me was fresh every time but drilling and blasting was unique on its own. The success of the mine’s production goals depends on the precision and value of the department of drilling and blasting output,” she added.

She insisted that one of the primary aims of a Drill and Blast Engineer, and a source of great satisfaction, is the ability to produce an adequate volume of material and facilitate a smooth run for the production team. Creating designs, patterns and being able to reach a decent explosion at the end of the day is what she appreciates the most.

“It’s true that drilling and blasting requires the ability to make calculated decisions on designs and a lot of interaction with all the on-bench stakeholders all working towards achieving the desired output, which is a good blast, but it really isn’t a gender defined role, and having leaders who have the ability to mentor young and aspiring engineers, making sure we are guided towards the career path of our choice and being supported to achieve our goals, is a rare find in the industry, but I found it here at GGML,” Ruth added.

“Once I earned my bachelor’s degree in Mining Engineering, I made sure I finished with the highest GPA at the University since I had learnt it is today a pretty competitive field both skill-wise and academically. That, and my industrious character enabled me to reach to where I’m at now,” she recounts.

“Soon after graduating, I proceeded further to take a drilling and blasting course and earned my Blasting Certificate and immediately registered to the Engineer’s Registration Board of Tanzania as a Graduate Mining Engineer. GGML then gave me an opportunity to perform my internship in the Open Pit Mine Operations section. Everyone on the team contributed to my training and development, both on and off the field. I was kept on as a Drill and Blast Engineer because the company recognized potential in me. I hope to be a Professional Mining Engineer in the Drilling and Blast Department in the near future,” Ruth divulges.

She is encouraging the youth to envisage a goal and go for it: “Do not hesitate when you get an opportunity to learn and progress in your area in any department whatsoever.”

“For individuals in the mining sector and those desiring to join, most especially females, it would be a delight to see more young ladies in the drilling and blasting field since it does have a thrill of its own.” The day-to-day technological problems equip us to be the engineers and future leaders we hope to be tomorrow. For this division to keep growing, it needs the smartest young people in the country to join it. The general public needs to understand that both girls and boys can perform drilling and blasting with excellent results. Girls should not be scared to become not only engineers but also drilling and blasting engineers. Nothing is impossible under the sun!” Ruth states boldly.

Geita Gold Mining Limited (GGML), like many forward-thinking companies, has made it a priority to maintain best practices in human capital as they navigate the challenges emerging from the maturing Tanzanian labour market, by selecting the best candidates purely on merit and without gender limitations. The Company has strong non-discrimination policies and values the diversity of its workforce which enables it to actively invest in initiatives that promote women in the workplace. One of these initiatives by GGML is sponsoring its female employees to participate in the Female Future Program administered by the Association of Tanzania Employers (ATE), which prepares them to take up leadership roles within and outside the Company. There is also accountability at all levels of the organization to uphold and comply with local legislation and company-specific diversity and inclusion targets. This led to the recent launch of the ‘Speak-up’ campaign against sexual harassment to create a conducive environment for women to thrive.

Consequently, GGML has continued to garner numerous awards for its performance in the mining sector and in July 2022 at the 46th Dar es Salaam International Trade Fair popularly known as Sabasaba, the company was recognized by the National Social Security Fund as one of the most compliant employers in the Tanzanian mining sector. The company was also awarded the Best Employer of the Year under ATE in 2018, shining over other traditionally better-positioned companies in telecommunications, banking, and beverage companies.